Summer Meals is a crucial program that helps bridge the gap for students who rely on free and reduced-price school meals. But only 1 in 7 eligible children nationwide receive Summer Meals due to access barriers including transportation, parents’ work schedules, and lack of awareness about the program. Because low-income households that were already struggling with poverty and hunger before the health crisis are continuing to struggle to afford nutritious food, Summer Meals are more essential this summer than ever before.

According to the Food Research & Action Center’s 2020 Summer Nutrition Status Report, 183,027 Connecticut children participated in the National School Lunch Program during the 2018-2019 school year but only 34,736 children participated in the Summer Meals program in the summer of 2019, meaning that only 19 percent of eligible children in the state received Summer Meals. And while Connecticut ranks 9th in the nation of states that have the most participation in the Summer Food Service Program (SFSP), there is still much work to be done to ensure that every eligible child receives nutritious food during the summer months. Not only does a lack of participation in the Summer Meals program mean that kids are missing out on nutritious food, but states are also missing out on millions of dollars in federal reimbursement.

The advocates and school officials also championed a universally free school meals program, which was proposed in the Universal School Meals Program Act of 2021 — federal legislation that would make school meals free for all students regardless of income. During the pandemic, USDA has allowed schools across the country to provide meals to students completely free; advocates are urging Congress to pass the Act so that schools can continue to provide free meals for all students, which would reduce the administrative burden on school districts, eliminate school meals debt for families, and boost participation among children.

The advocates also stressed the importance of federally-funded programs like SNAP (the Supplemental Nutrition Assistance Program, formerly known as food stamps) as the most effective way to end hunger. In just one week in May, 209,083 Connecticut residents did not have enough to eat, according to data from the U.S. Census Bureau’s Household Pulse Survey. This includes 89,734 households with children. In February (the most recent month for which data is available), the federally-funded SNAP program (formerly called food stamps), provided 373,474 Connecticut residents with a total of $80.5 million worth of food, a significant increase as a result of a recent expansion to the program enacted by the Biden Administration and Congress.

Jason Jakubowski, President & CEO Connecticut Food Bank/Foodshare, said, “Over the course of the pandemic we have seen food insecurity rates dramatically increase all across Connecticut, but particularly with regard to children. Thankfully, we have tremendous leaders at both the state and federal levels who have helped to increase flexibility in both school and summer meal programming. Food insecurity is almost always at its highest during the summer months – which is why these meal programs are more important now than ever.”

Joel Berg, CEO of Hunger Free America, a national nonpartisan nonprofit organization, visited Meriden as part of a coast-to-coast journey this summer to shine a light on the continuing national hunger crisis, to meet with those working on the front lines of hunger, and to advocate for long-term, public policy solutions to food insecurity. Three AmeriCorps VISTA members who are part of Hunger Free America’s Anti-Hunger Corps are serving with Meriden Public Schools this summer to increase Summer Meals participation in the district.

“Even with the pandemic easing, hunger still ravages virtually every rural and suburban town and urban neighborhood in the nation – including throughout Connecituct – which is why I am traveling across the country to meet with those working on the front lines of hunger and resilient families facing food hardship from coast-to-coast,” said Berg. “My goal is to energize the work to enact the public policies needed to end U.S. hunger once and for all.”

Assistance for Those Facing Eviction

Attorney Deborah  Witkin, Executive Director, CT Legal Services, Inc., has requested the following information be provided throughout all nonprofit agencies.   With the moratorium for prohibiting tenant evictions lifted, many persons struggling with loss of income and  food insecurity may now be facing eviction.  Please provide the following information at your agencies as well as to those you know who may be facing eviction. 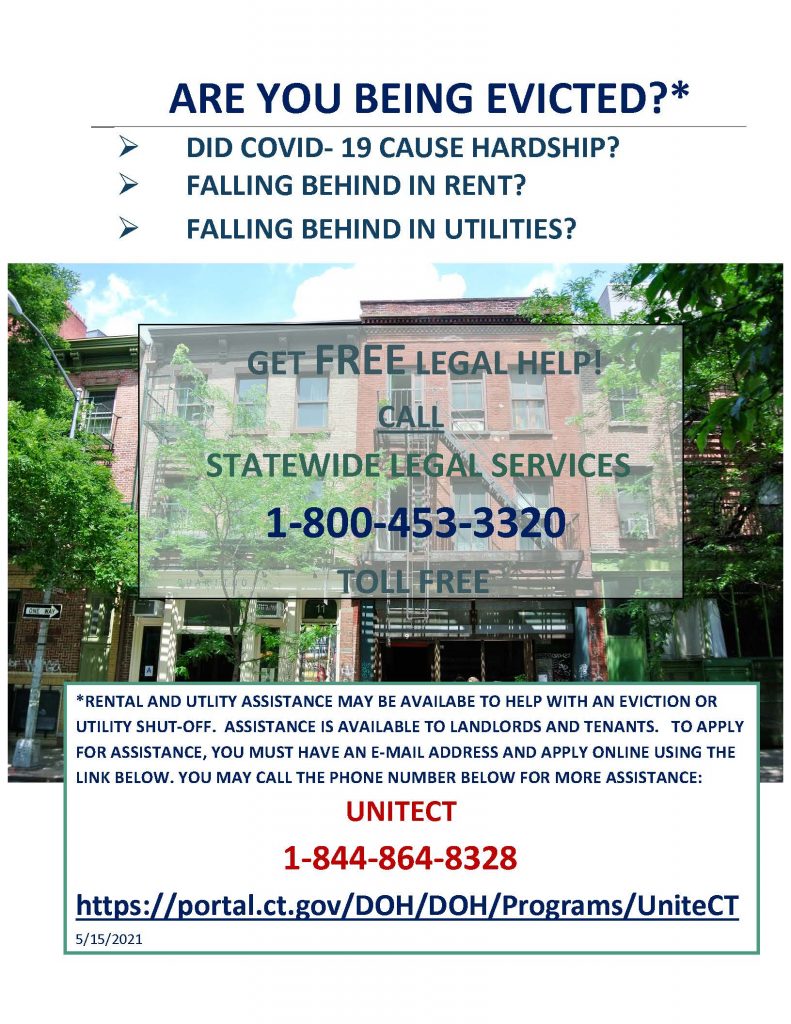 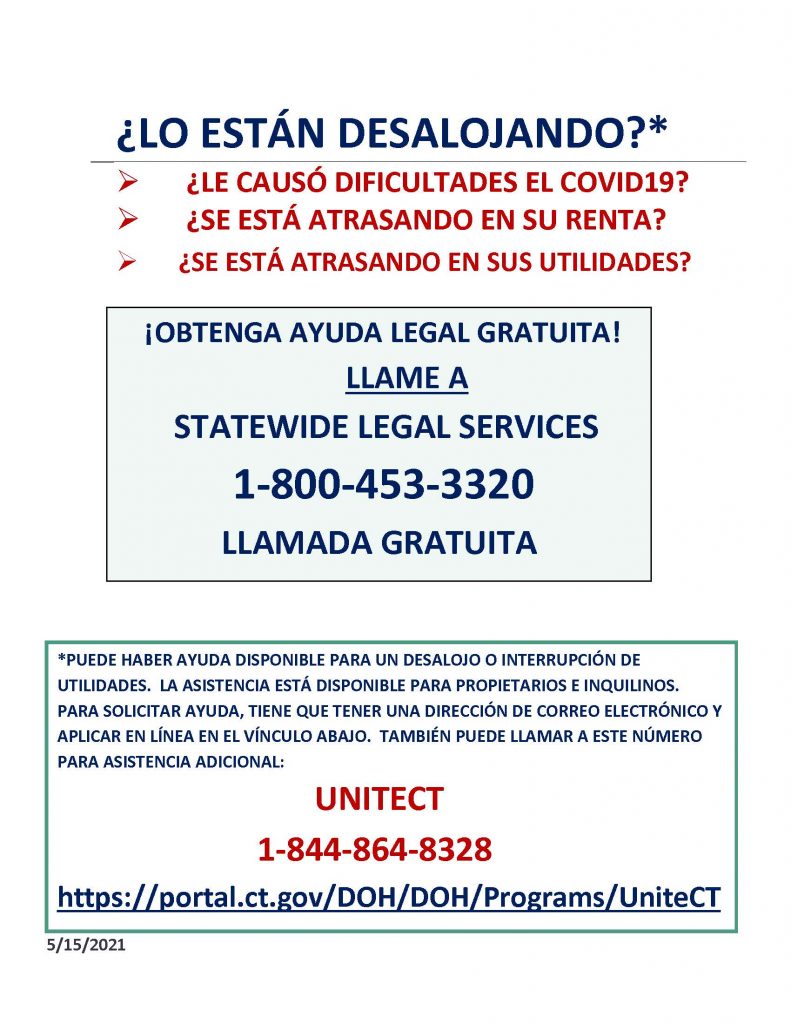 The Women and Families Sexual Assault Crisis Services is beginning a new support group on June 23rd.   The support group will be focusing on mindfulness, with a seven week course exploring how to utilize mindfulness when healing from trauma, and becoming more involved in your healing. 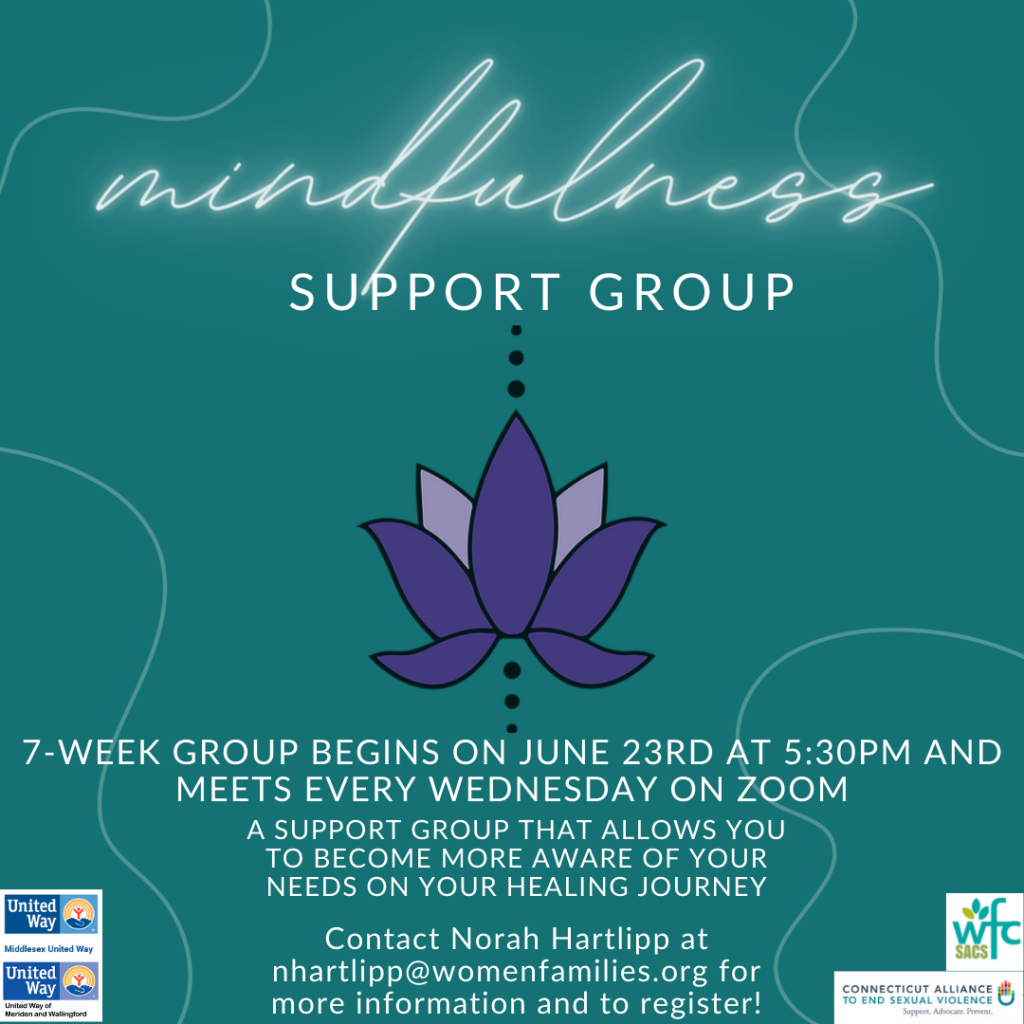 This group will take place on Zoom.  Each week will focus on a new aspect of mindfulness. If you or someone you know may be interested in taking part in this group, please reach out to Norah Hartlipp at nhartlipp@womenfamilies.org for additional information and to register for the series. 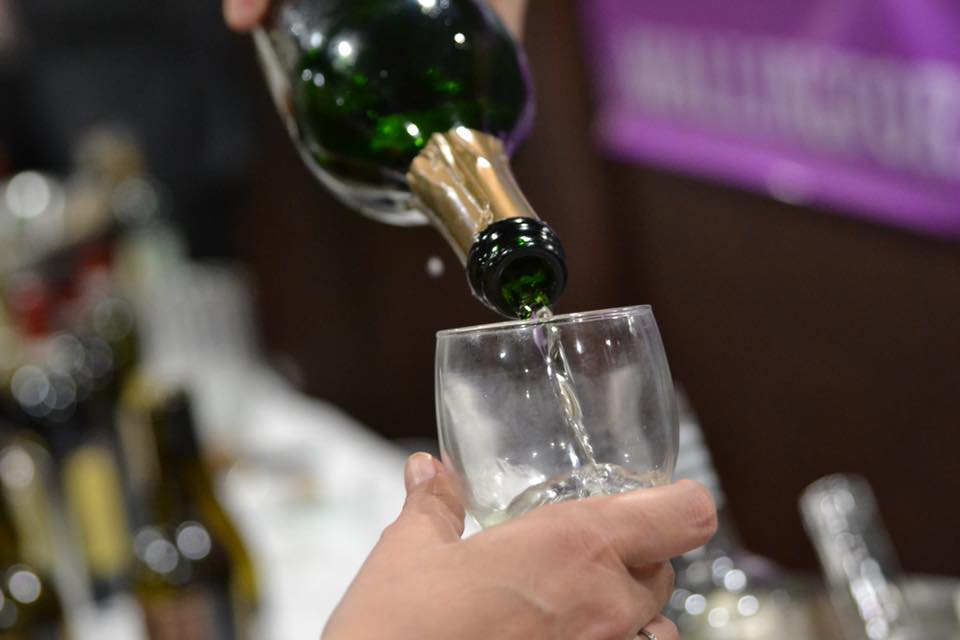 Due to an abundance of caution related to Coronavirus COVID-19, we want to advise that the Board of Directors has determined to place the annual event on hold until further notice. 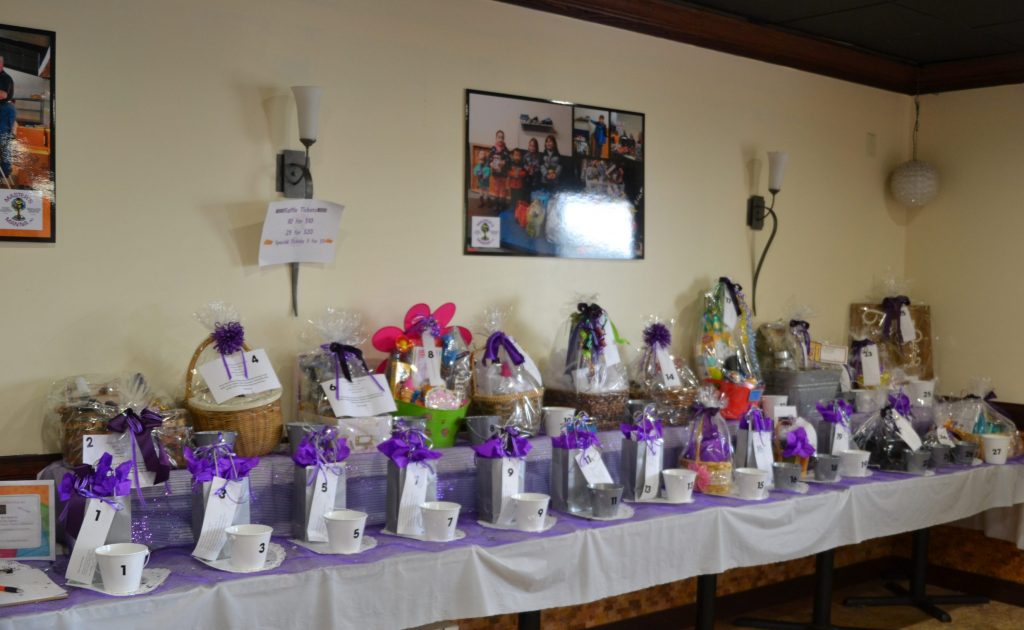 Master’s Manna will issue a “SAVE THE DATE”  notice along with  details when we have determined a safe and appropriate time and place for this fun filled event .